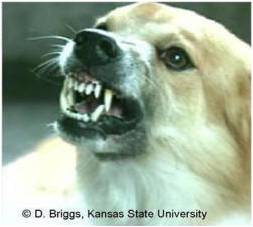 Rabies is the oldest fatal zoonotic diseases, an animal disease transmissible to humans known to mankind. It is caused by Lyssaviruses of the family Rhabdoviridae and can affect all mammals including humans. Transmission occurs through exposure to infectious saliva, mostly via bites of infected animals. Once symptoms of the disease develop, rabies is inevitably fatal to both animals and humans. However, rabies is 100% preventable - wound cleansing as well as active (vaccine) and passive (immunoglobulins) immunizations, done as soon as possible after suspect contact with an animal and following WHO recommendations can prevent the onset of rabies in virtually all exposures.

Rabies is widely distributed across the globe. It is estimated that more than 55 000 people die of rabies each year, with 95% of human deaths occurring in Asia and Africa. Most human deaths follow a bite from an infected dog. Between 30% to 60% of the victims of dog bites are children under the age of 15. Globally, the most cost-effective strategy for preventing rabies in people is by eliminating rabies in dogs and wildlife animals through animal vaccinations.